What Does ‘Peak Meat’ Mean For Plant-Based?

When plant-based meats first came to market, many speculated that an eventual shift from meat sales to alternative meat would be possible, even likely. Research indicates this overtake might be closer than once thought.

In economic terms, ‘peak meat’ describes the “observed and projected long-term decline in meat consumption following an extended period of growth.” Meat production and consumption do not cease when we reach peak meat, but they cease to continue their excessive growth. While meat intake differs greatly across the globe, on average, global meat production has nearly quadrupled over the past 50 years. Each passing year witnesses humans consume approximately 350 million tons worth of meat. However, an increasing interest in sustainability and nutrition has generated momentum for plant-based meats to take up higher percentages of peoples’ plates. Conservatively, Boston Consulting Group predicts that 11% of all meat, seafood, eggs, and dairy will be plant-based by 2035.

Are We There Yet?

The past century constituted a period of extensive growth in modern animal meat consumption. Highly correlated with GDP per capita, meat consumption seems to have increased as countries have become richer. That being said, the OECD-FAO Agricultural Outlook 2021-2030 reports weakening meat demand in high income countries and a shift to poultry. It seems that there’s a point at which having more expendable income increases an individual’s drive to purchase meat, however, OECD analysis suggests that “at a GDP per capita exceeding about USD $40,000, growth of GDP is no longer a driver of growth in meat consumption.” Those above this bracket do not consume more meat proportionate to their income, in contrast, they are more attuned to environmental, health, and animal welfare concerns, which thus drive their meat consumption down on the whole. People with financial means and value-based incentives to consume plant-based foods are poised to fill the gap in decreased meat consumption with plant-based foods. The US, the UK, Canada, Australia, Germany, and many other countries have an average GDP per capita above $40,000, so this income threshold has already been reached. Accordingly, depending on which market or country you examine, ‘peak meat’ is either actively occurring, or is on track to occur.

Chicken and white meat represent an exception and one area where stagnation at higher income levels does not occur. Consumers find poultry appealing for its lower fat content and generally lower price tag than beef and pork. Accordingly, poultry meat is a key driver of growth in global meat production. Because beef and pork consumption has been consistently decreasing per capita since the mid 2000s, poultry being on the rise makes it a primary barrier impeding markets from reaching peak meat. This should signal to plant-based meat brands a need for plant-based poultry research and development to fulfil consumer demand beyond the commonplace breaded vegan chicken nuggets. 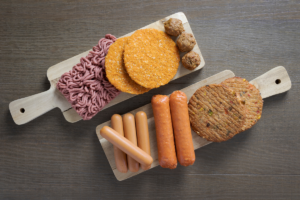 In these critical years to come, the role of plant-based in the ‘peak meat’ equation should not be underestimated. But when it comes to plant-based options, oftentimes people find themselves choosing between a black bean burger and a less-healthy vegan chicken nugget. Those preparing meals at home crave something more wholesome than the fast-food nature of frozen nuggets and patties that “bleed” beet juice, all things quick and delicious. Category Manager of frozen foods for Kroger, Meghan Barton, said succinctly in a recent Food Business News article, “I want to see the vegetables.” Many conventional vegan foods aim to replicate the fried and breaded nature of their meat analogues. While there’s a time and place for these products, Barton’s comment hints at the need for plant-based to diversify offerings. Consumers want accessible, delicious, less-processed meat alternatives that they can incorporate into weeknight meals: faux chicken breast, faux ground turkey, faux steak, etc. The milk transformation has successfully poised plant-based milks in this way: accessible and easy to substitute in most home cooking. Plant-based meat options must continue to innovate for parity with meat-based products.

Future of Food, a 2019 USB research study that surveyed consumers and restaurants in the US, UK, and Germany showed that 11% of people were very interested in alternative proteins, 66% were somewhat interested, indifferent, or somewhat not interested, and only 23% were not interested at all. The seeds have been sowed, but the public requires nurturing for plant-based meats to grow into their full potential. Namely, lower prices and taste innovation will be key.

Plant-based brands have a clear opportunity with peak meat and its decline in meat production and consumption. Unfortunately, higher prices, un-renewed restaurant contracts, and bad press have made this opportunity less easy.

Big brands such as Impossible Foods and Beyond Meat have come under fire and experienced record lows this year. The novelty of plant-based meat alternatives sparked consumer interest and surged sales for several years. And while most people are interested in trying something once or twice, creating long-term buy-in has proved more difficult. Although with notable exceptions and shifting trends, plant-based options, on average, are less affordable than meat.

For the first time, and in contrast with recent years of exponential growth, plant-based alternatives did not sell at an increased rate this year. Restaurants and retailers are also dropping Beyond and Impossible as suppliers, including US taco stronghold Del Taco. Although our white paper suggests that slumping sales from bellwether brands could due to more brands and own labels taking market share.

In short, humans consume a lot of meat, but this number is approaching its peak, from which it will decline. Hiccups in the world of plant-based meat sales are not a catastrophe in what is a stabilizing plant-based industry. Current vegan frontrunners and emerging plant-based brands alike can be strengthened with increased affordability and equivalence to meat alternatives. This will recapture and nurture consumer and retail interest in plant-based, capitalizing on the market opportunity of peak meat.

Sarabeth Davis
Sarabeth is a writer with extensive SEO, digital marketing, and content creation experience in the plant based and wellness spaces. She analyzes the market success of vegan brands and industries, and—in her kitchen—she analyzes their taste. A baker by day, she wakes before dawn to make breads and pastries for the people of Philadelphia, Pennsylvania, US, where she lives with her rescue dog, houseplants, kombucha SCOBY, and ginger bug. Sarabeth believes in feeding the vegan movement with delicious food and unwavering compassion.

What’s Trending in the Plant Based World?

Plant-Based Interest Booms in the UAE

Plant Based World Pulse is a go-to resource for the plant-based industry. Offering high-value insights, educational content, and the latest information year-round, it compliments the annual industry events Plant Based World Expo North America in New York City and Plant Based World Expo Europe in London.
We use cookies on our website to give you the most relevant experience by remembering your preferences and repeat visits. By clicking “Accept”, you consent to the use of ALL the cookies.
Do not sell my personal information.
Cookie SettingsAccept All
Manage consent

This website uses cookies to improve your experience while you navigate through the website. Out of these, the cookies that are categorized as necessary are stored on your browser as they are essential for the working of basic functionalities of the website. We also use third-party cookies that help us analyze and understand how you use this website. These cookies will be stored in your browser only with your consent. You also have the option to opt-out of these cookies. But opting out of some of these cookies may affect your browsing experience.
Necessary Always Enabled
Necessary cookies are absolutely essential for the website to function properly. These cookies ensure basic functionalities and security features of the website, anonymously.
Functional
Functional cookies help to perform certain functionalities like sharing the content of the website on social media platforms, collect feedbacks, and other third-party features.
Performance
Performance cookies are used to understand and analyze the key performance indexes of the website which helps in delivering a better user experience for the visitors.
Analytics
Analytical cookies are used to understand how visitors interact with the website. These cookies help provide information on metrics the number of visitors, bounce rate, traffic source, etc.
Advertisement
Advertisement cookies are used to provide visitors with relevant ads and marketing campaigns. These cookies track visitors across websites and collect information to provide customized ads.
Others
Other uncategorized cookies are those that are being analyzed and have not been classified into a category as yet.
SAVE & ACCEPT